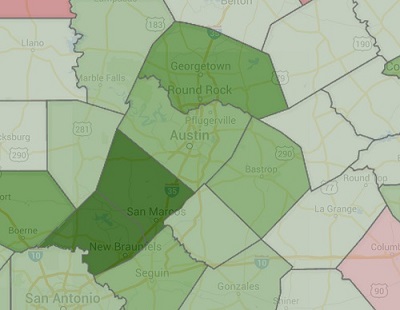 According to data from the U.S. Census Bureau the Austin-Round Rock Metropolitan area is among the fastest growing in the U.S. at #3. The 2014 data shows that 1,943,299 people live in the Central Texas counties of Travis, Hays, Williamson, Caldwell, Bastrop.

Hays County has seen tremendous growth over the last couple of years and is now the fastest growing county in Texas and the 5th fastest in the U.S. with 185,025 people.

Williamson County the 7th fastest growing county in Texas and has almost 500,000 people.

To review more of the census data check out this video and post:  Austin Metro Hays County Among Fastest Growing in US