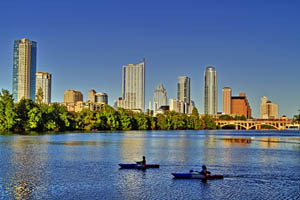 Thanks to a few companies who have downsized and taken less office space in Austin the vacancy rate has softened a bit, however rents are still high.

SolarWinds relocated to the AMD campus at 7171 Southwest Parkway where they leased 225,000 sf. They were at the Park on Barton Creek 2 located at 3711 S Mopac. Even with Solarwinds leasing that much space at the AMD campus there is still a lot of space left as they plan on vacating an additional 118,000 sf.

In downtown Austin which has been very tight for the last few months more space became available than was rented.

Don't get too happy though. A slight softening in Austin does not mean lease rates are getting any lower. They are still averaging $28 to $29 sf across all classes of space. Class A properties are going for over $40 sf in downtown Austin. In other suburban areas Class A rates average $33 to $34 sf.

There is over 2.4 million square feet of office space under construction in Austin however that does not translate to lower lease rates either. Overall in Austin and Round Rock combined there is around 42.5 million sf of office space, and about 5 million of that is not occupied.  Vacancy rates across all classes in the Austin metro area range from 9% to 11.8% depending on who you talk to.