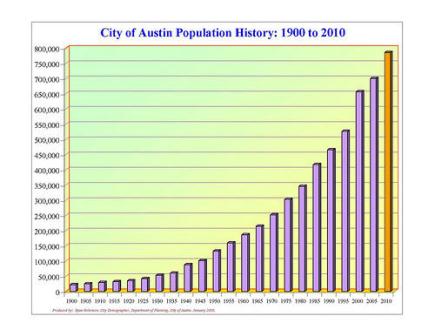 The population of Austin Tx has seen steady growth since its establishment in the mid-19th century. Each decade since has seen at least double digit growth. Some may think Austin has only recently been a boom town; the fact is that Austin has been a boom town since inception. Historically, during the last decade Austin population growth in percentage is actually lower than at any time in its history.

On average, Austin has doubled its population every twenty years. During the intervals when it didn’t, growth remained robust. Looking back to the year 1870 and going forward at twenty year intervals an observer can readily see the continuous influx of residents. Consider the following table:

Austin’s Population Growth in the Past Ten Years

Texas A&M’s Real Estate Center found that the Austin-Round Rock-San Marcos MSA grew by over 41% during the past ten years – tame, considering the population curve over the past century and a half. The Real Estate Center has projected the area’s population to hit over two million by 2025. The ‘Austin Business Journal’ predicts an even higher number – over 2.7 million. It sounds incredulous but the historical data support this conclusion. This trend will make Austin the 5th fastest growing metropolitan area in America over the next decade.

Data from the U.S Census Bureau shows that the population in the nearby suburbs of Cedar Park and Pflugerville has more than doubled in the past decade. Even relatively distant towns like Lockhart and Taylor have posted healthy population gains albeit at a more modest percentage. Growth has been nothing short of astounding in Pflugerville: from a population of below 500 in 1940 when it was an unincorporated community, the city is now estimated at approximately 50,000 residents.

In 2010, Austin’s land area encompassed 297.9 square miles with 2,653.2 people per square mile. By state standards, this is less dense than many other metro areas; for instance, Dallas has 3,517.6 per square mile, Houston has 3,501.5 and San Antonio has 2,879.8. These statistics augur more population gains for Austin and the surrounding area.