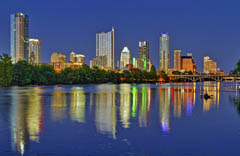 Ranking 10 to the most income-segregated metros in US, Austin gains infamous reputation. Based on the study conducted in the Atlantic Cities by Richard Florida, Austin's households are segregated economically.

Florida stated that economic segregation was a means of strategically focusing funding and services in upper-income households but greatly affects social mobility.