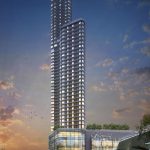 The city of Austin is staged for the emergence of two new 1,000 room convention hotels in the downtown area. One is the 33-story JW Marriott that will be built at Congress Avenue and Second Street and the other is Fairmont Austin, a 50 story hotel set to be built at the northeast corner of Cesar Chavez and Red River.

So what will this bring to Austin?

Equally as important as the additional rooms that will be available in the downtown area is the dramatic increase in space that Austin will have to attract larger conventions. Aside from SXSW and Austin City Limits Austin has been home to many small and medium sized events, however, the city has long been overlooked as a large convention destination due to a lack of commercial space necessary to hold and board a convention of great magnitude. Currently, the primary inventory of space used to house conferences belongs to the Austin Convention Center and the Hilton Austin. Alone, the Fairmont Austin will tack on an additional 70,000 square feet of convention space to the downtown Austin market. The JW Marriott has already been booked to house the National Association of Regulatory Commissioners in November 2015, just months after the hotels scheduled completion.

Construction for the JW Marriott is set to begin in late June. The Fairmont Austin is also due to be completed in 2015 and planned to be 580 feet in height, making it the second tallest building in the city behind the Austonian. Each hotel is also said to add roughly 1,000 jobs to the Austin area, excluding additional jobs added during the construction period and contribute upwards of 9 million in property tax. Click here to read another recent post about the growing Downtown Austin Market.