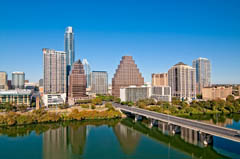 Forbes magazine unveiled this year’s list of the coolest city in United States. From 19th place last year, Austin is now hailed as the third coolest city in the country.

What it takes to be named as the coolest city? Aside from the reputation, Forbes considered other key factors such as arts and culture, recreation, diversity, food, population statistics as well as migration statistics.

Ranked below Washington D.C. and Seattle, the Live Music Capital of the World scored high on the arts and culture category. However, it got low points for recreation amidst the number of outdoor activities it offers.