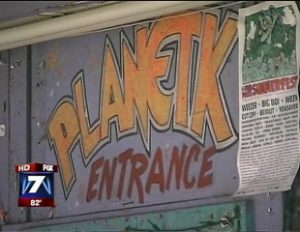 As I sat in on the Bee Cave City Council Planning & Zone committee meeting last week, it was almost unanimous that residents of Bee Cave are against having Planet K move in to the City of Bee Cave. Planet K purchased the old Trading Post restaurant that sits smack dab in the middle of a major intersection at BeeCaves and Hwy71 right in between the Shops at the Galleria and the Hill Country Galleria. Residents are afraid that it will change the vibe and overall appeal of the city if Planet K moves in.

KVUE featured a news story on April 5th that also discussed the Bee Cave City Council has unanimously adopted some new ordinances at Monday’s specially-called meeting. Council members told the owner of Planet K that their actions had nothing to do with his business, but he says Planet K is no doubt the target of these new city ordinances. The old Trading Post on Highway 71 has been around since 1934. It is scheduled to become Planet K’s 12th store.

“We are improving the place, putting a new roof on it, putting in a new floor,” said Michael Kleinman, the founder of Planet K.

A two-week-old stop work order from the city has kept the latest Planet K from orbiting in Bee Cave.

“I think these people are crazy myself,” said Kleinman. “They overacted to a situation. I guess they are going to have to live with it, but it is certainly not going to keep us from opening.”

“We are not a sexually oriented business,” said Kleinman.

The ordinances also puts limits on what can be sold inside, namely drug paraphernalia.

“Drug paraphernalia is illegal,” said Kleinman. “We don’t sell anything that is illegal.”

My Fox Austin also featured the story in an April 26th news story stating that the City of Bee Cave has placed a temporary restraining order against Planet K. Watch this video to get a glimpse of the story and to see the Bee Cave City Council at work on this.