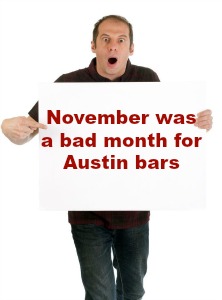 It seems the liquor industry in Austin had not fared well in 2015 because the recent report of the Texas Comptroller’s Office stated that only $60.4 million was sold in Austin in November 2015 in comparison to its 2014 record of $63.3 million the same month. According to the analysis, November 2015 is also one of three months in 2015 that showed a significant drop in liquor sales per licensed brands. Aside from November, the report indicated low liquor sales in Austin in April, and June. Out of the bars purchasing liquor in Austin, it is Red River Street bar and Red Eyed Fly (Sidewinder) that purchased the most liquor in November 2015.

Read more about this here: Liquor Ticker: November was a bad month for Austin bars