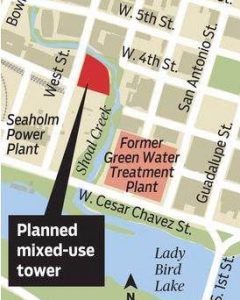 A new high-rise tower is being planned in downtown Austin that could become the city's 2nd tallest. Located at the corner of third street and West Avenue on 1.7 acres the new building could be as tall as 50 stories or more. It's expected to have 400 condos, 120,000 sf of office space, and 15,000 sf of retail space.