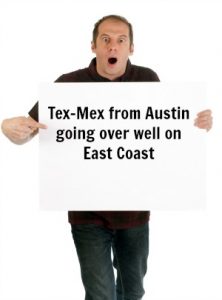 Chuy is now making airwaves in North Carolina as the Tex-Mex restaurant announced that they will open a new branch in the East Coast. The new branch will be situated in Parkside Town Commons in Cary, North Carolina, including the branch to the restaurants already owned by the company in 15 different states. It is expected that the new branch of Chuy’s – the fourth in North Carolina – will be opened on March 2016. The first Chuys in the region was established in November 2013. The sales on the opening of the new Chuy’s will be given to the Inter-Faith Food Shuttle of Raleigh as the official charity partner of the restaurant.

Read more about this here: Tex-Mex from Austin going over well on East Coast