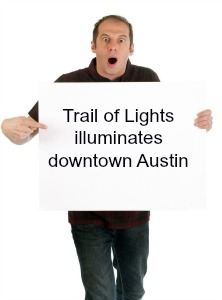 The 2015 Trail of Lights had officially wrapped up its 15-day event as more than two million light bulbs slowly faded late last Tuesday.

According to South by Southwest and ABJ Research, this is considered as Austin’s the second largest festival with over 400,000 expected visitors over the span of 15 days and costs around $2 million to set up.

Sights included in the trail are the Zilker Tree which stands at a height of 155 feet and the Ferris wheel which offered views of Austin.

The 2015 event was the second year admission charges were required in certain days.