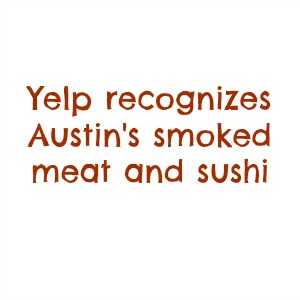 Three barbeque and sushi restaurants in Austin are now recognized by critically recognized review site Yelp as some of the best Asian and barbecue joints around Texas. Yelp included these three restaurants after checking out the customer and star ratings from its web and mobile applications. The company also uses market data they acquire on the ground to sort their list. Previously, the company only used market data for their rankings since they were established in 2004. Prior to the current ranking, Yelp has recognized “Hey!… You Gonna Eat or What?”, a sandwich trailer in Austin, for last year’s ranking.