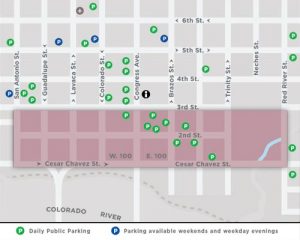 Austin’s Second Street District is a six-block infill and redevelopment program located north of Lake Lady Bird on the southern edge of downtown. The mixed-use project opened in 2005 thanks to the city council’s decision to revitalize the area from a seedy rabble of abandoned warehouses.

The project has been an unqualified success. AMLI Residential, the management company that oversees the majority of retail space in the district, cites 90+ % occupancy as a measure of the district’s popularity with downtown residents and visitors. Buzz has been building with the opening of the Moody Theater (the new home of the venerable PBS program ‘Austin City Limits’), the Violet Crown cinema and the luxury W Hotel. Read more about the scarcity of office space in downtown Austin here.

The Austonian Condos, Austin’s tallest building at 56 floors, boasts a pool, dog park and even a rooftop clubhouse that offers stunning views of the capital and downtown. It’s the tallest residential building in Texas and leases are available to those who want to test the area before committing to a condominium purchase.

There is also a strong retail base that anchors the development. Such upscale businesses as Prize, the Apple retailer MacWorks and the woman’s lingerie shop Teddies for Bettys are some of businesses that have made their presence known in the area. Others include Design Within Reach, The Girl Next Door and the Royal Blue Grocery. Fodor’s recommends Peyton’s Place as a “modest-size gem of a boutique” renowned for its affordable prices and friendly staff.

For those interested in upscale libations, III Forks offers both a restaurant lounge and a piano bar with martinis and a “Sommelier’s Pick of the Cellar.” Cantina Laredo is a more laid-back establishment serving specialty margaritas featuring flavors such as pomegranate and mango. Jo’s Coffee, long a South Congress mainstay, has opened a location here as well.

Cultural amenities include the Austin’s Children’s Museum and the ‘Art in Public Spaces’ water-themed sculptures located along the superlatively clean and landscaped sidewalks.

“2SD,” the quirky moniker used to describe the area, was envisioned by the city of Austin “to enhance the identity and image of downtown Austin as a civic and cultural destination for residents, visitors and businesses while preserving and enlivening Austin’s sense of place.” The “uniquely identified pedestrian environment” links the Convention Center Complex on the east side of downtown to the new City Hall west of Congress. Discover more of this singular Austin locale at http://www.2ndstreetdistrict.com

If you are interested in leasing office space in Austin's 2nd street district let us know and we can help you out.