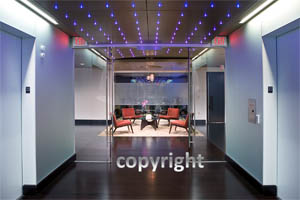 Before the maturity of LED lamps, the use of fluorescent lamps was critical to passing energy codes in lighting commercial spaces. While fluorescent lamps were, at the time, the most energy efficient solution, they did not always produce the most flattering light. Borrowing tricks from the theatre, the architect experimented with colored gel sleeves to wrap the tubes for a desired effect.

The first two pictures show examples of these colored sleeves. The first is The State Room at 60 State Street. The venue was used as for a variety of rentals from corporate lunches to weddings. The transparent undulating ceiling tiles were used to simulate the waves of the Boston harbor below and assisted with the illusion of height in the room. Fluorescent tubes above the ceiling were sleeved with a variety of gel sleeves to produce different atmospheres intended to mimic softer incandescent lights for day use and deeper sunset tones for night events. 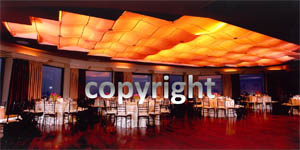 The second photo is from the offices of Certain Affinity in Austin, Texas. Video game developer, Certain Affinity has been involved in such successful games as Halo and Call of Duty. The design was inspired by video game environments and influenced by the element of discovery. The wide corridor is a transition between the creative work space and administrative areas. It is separated by a sequence of staggered arches framing the view to each area and further differentiated with different hues of blue illumination, created with a variety of gel sleeves over the fluorescent lamps.

With the development of LED lights and the reduction of the costs of this technology, we can create similar effects inherently in the temperature of the lamp. The last photo is of Carat Interactive, an advertising agency, in the John Hancock Tower in Boston. The company logo is a swirling ball of dripping colors which was used for design inspiration. Mirrored walls and reflective floors highlight the custom metal paneled ceilings in the elevator lobby. LED bulbs were set in each perforation in the ceiling and then programmed to change patterns and colors setting the expected dynamic image of a creative company. 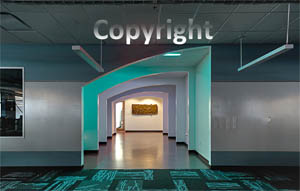