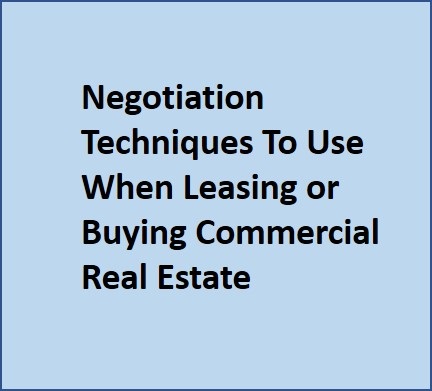 Every one at some point in their life has negotiated something, however those that learn and use good negotiating techniques will ultimately do better than others. Negotiations are a part of every aspect of your business and personal life and the techniques you learn can be used in any setting.

Take commercial real estate for example. If you own or run a business you will eventually have to negotiate a commercial lease or purchase. Whether you lease retail, office space, or warehouse space knowing how to negotiate will help you get a better deal. The key to remember here is that BEFORE you start negotiating you MUST do your homework and have all the information necessary to equip you to negotiate better.

Below I have outlined 7 negotiating techniques that IF USED will help you get a favorable deal when leasing or buying commercial real estate. Now by no means is this a complete list however using some of these techniques will give you an advantage over others that don't use them.

One of the simplest techniques that is empl0yed in negotiating commercial leases is the walk away. One party gets up and walks away from the deal. Not because they don't want the deal, but because they want to test the resolve of the other side. It's also important to understand that is may backfire. It is kind of like bluffing in poker. They may call your bluff. So in order to employ this technique it is important to be serous about letting the deal go if you have to. The best result of  a walk away is that the other side calls you back to make the concession that you walked away about. If someone walks out on you, you need to know how important each concession is and be willing to call someone back if you are willing to concede. Don't just give in when you call them back though. Call them back by saying that you will concede on this issue if they will concede on another. This lets them know that you want to continue, but that you are also not a push over. When the other side walk away, it can sometimes be a great time to ask for significant concessions because they may be looking for a way to come back. They may have bluffed and could be hoping that you don't call it.

This is a common and powerful technique that allows you to slow down making concessions and many times eliminates the request for concession from the other side. It is simply the technique of telling the other side that there is someone that you need to get approval from before making the decision to lease commercial space. If you find this technique being used by the other side, then simply request to know the authorities opinion on something before making a concession. In other words say, “I'll consider that if I know for sure that your associate will agree to it.” This will kill their attempts to pin you down and cause them to either get approval or admit that it is not that important

When you set the deadline you control the negotiation. Because approximately 80% of the agreements are reached in the last 20% of the negotiation, it is important to understand that the person who sets the deadline manages this aspect of the negotiation. And be aware when others invoke deadlines. As your deadline approaches, the more likely it is that the other party will concede to your demands. Combine the power of competition with your deadline to increase your effectiveness. Suppose that in negotiating the commercial lease terms I say, “It's been yours and one other property.” If we are apart on an economic issue, I can say that I want to give this further consideration. “I'll give you my final determination on Friday”, if they want to wrap up the deal sooner, they may need to make some additional concessions.

Always test the other party's deadline. When the other party is attempting to set the deadlines, it is important to question their deadlines. If they say to you, “I need your answer by Friday morning”, don't acquiesce without finding out why. Good responses to this statement would be: “Why Friday?” or “Do you have another prospective transaction for this space?” If they answer “yes” to this last question asked, “How long have you been working with them?” or “How far along are you in that deal?” Dig into this issue to test its veracity. The more you question, the better your chances are of eliciting responses that will restore the negotiating to you.

When you set the deadline you have the power to change it. Extending a deadline is a delicate aspect of the commercial real estate negotiating process. It is a technique that can be used to your advantage, but it should be used infrequently. Continually extending deadlines can be misconstrued. If you call me on Friday and ask “What is your decision on leasing our warehouse space?” I would probably respond by asking you about a deal point I want a concession on. If you decline to concede this point I may consider re-establishing my deadline to allow you time to reconsider. I might say, “I haven't had the time to reach my decision yet. However, unless you can meet my needs by Wednesday I'll probably take another property. How about calling me back Wednesday or sooner if you change your mine?” They key here is to recognize the other party's attempts to control the deadline and establish your own deadlines.

Nibbling is asking for additional concessions after agreement. It uses the concept of commitment and consistency. Whether you choose to use nibbling in your negotiations is a personal decision, nevertheless, you should know about nibbling. The most common form of nibbling occurs when you have just purchased a car. After you make your deal, the car dealer offers to sell you an array of options. The dealer knows that you are most susceptible to buying these items immediately after make the big decision. These items are loaded with profit for the dealer. The selling or negotiating that goes on just after the sale or agreement has been reached  is called nibbling.

There is tremendous tension during the negotiations for both parties. That tension is released when the agreement is reached and both parties feel a great sense of relief at the moment of agreement. This is when the nibbler casually presents one or two additional requests. Often they are couched inn an assumptive closing statement. The other party, not wanting to reopen the negotiation and risk losing the deal quietly goes along.

The primary defense against nibbling is to make the nibbler feel cheap. Another defense is to offer to re-open the negotiation. Remember that the other party feels the pressure too and probably is not inclined to re-open the negotiation. Another defense is to invoke the absent authority and defer the decision to them. It's easier to say no to a nibble when the glow of a successful negotiation has faded. Remember that at the moment of agreement you and the other party are both susceptible to give up additional concessions. Prepare your defenses against nibbling in advance and anticipate that they may come.

Have you ever felt as though the other party will never stop coming back for more during a negotiation? That each time you get close to an agreement the other party makes additional demands? That they are grinding away and you are powerless to stop them? This is known as grinding and there are several good defenses against this. Always ask something in return for each concession you make. This is called trading off and it is important to a successful negotiation because it creates value in the concessions you are making. No matter how inconsequential the concession may seem to you, developing this practice of asking for something in return. In developing this practice know that timing is important. Take time to consider carefully the other party's demands to avoid responding too quickly. Overly quick responses tend to send the message that you don't take the demands seriously or that you are trying to shift away attention from the issue.

There is a a principle that says that the value of services is greatly diminished after the services have been rendered. For this reason it is better to ask for a trade off when you make your response rather than save it for later. However, if you have established value in your concessions by asking for something in return, even if you don't get it, you can say “We did that for you back then, now we want you to do this for us”

A re-framing question is a technique that some negotiators use to redirect or change the original focus. This technique is a valuable one to both who use and recognize a re-framing question. In a negotiation pay close attention for subtle re-framing sentences like “I think the question we need to ask here is…” Chances are they are about to attempt a reframe. The way to counteract this is to listen carefully to what is being said. Do not agree with it if it does not focus the negotiation on the points that you need to focus on.

There are negotiators that have mastered the use of controlled emotion as a negotiating tactic. The most recognizable are flinching, showing anger and the walking away.

Have you ever been in a situation where after quoting your asking price the other party physically flinches and says, “I had no idea you were asking that much! I'll never pay that price!” If you reacted by lowering your price or offering some other concession, you probably fell prey to the flinch. To defend against the flinch you must first recognize it for what it is. Flinching is both an opening gambit designed to lower your expectations and more important, it is an expression of interest. Respond calmly; imply flexibility without making a specific concession, then turn the discussions to the benefits of your tenancy. Attempt to get the other party of make the first offer, to establish the bottom of the settlement range.

Sadly, some people still use anger to gain concessions in negotiation. This tactic is designed to get you to deal with the other party's emotions rather than the issues. We often find this tactic tied to the walk away. The best defense is to focus your attention on the movement of the goal concessions as they cross the table. Keep your attention on what is going on with issues and not what the people are doing in the negotiations.

Again there are many more negotiating techniques that you can use when negotiating commercial leases however the 7 listed above will get you started. You always want to ask for what you want however just keep in mind you won't always get it. Don't let you emotions get in the way during negotiations AND make sure you give yourself plenty of time before you need space or your existing leases expires. Good commercial real estate negotiations take time.