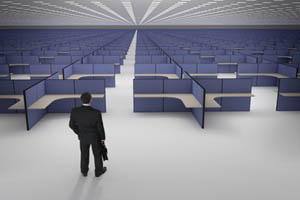 Frank Lloyd Wright, a modernist architect in the early 20th century saw rooms and walls in offices as downright fascist. This group of modernists’ architects thought that bringing down the walls and designing a spacious and more flexible open office plan would liberate office workers from their box liked office rooms.

Interior designers used cubicles to put some privacy and soul back in the open space plan setting. Cubicles originated in the 1950s when a group of Germ designers introduced these cubicles for privacy. It was called Burolanschaft or in English office landscape.

In 1064, Herman Miller introduced the “Action Office System” that offers different sizes of cubicles from multiple desk heights to larger surfaces. In 1068, he sold the modular component of his AOS. Unfortunately companies prioritize space saving aspects of these designs.

Today many companies adopted the so-called pods which are designed as precubicle rows of desks. Open office plans may encourage teamwork and ambient awareness. However, according to studies on this field, it can also cause some negative effects like increase employee turnover, high blood pressure, and conflict. Hence, it is best to design office space according to the nature of work of employees. If the nature of work deals more group discussions and collaboration, an open office plan is good. However, if the nature of work is mostly on concentration and individual work, a laptop that needs focus, it is best to have some privacy and quietness in the environment.