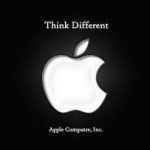 Apple’s Austin office Campus has been a buzz since the contract signing of the plan. Now, let’s take a peek of Apple Inc.’s new Austin campus. The photos were taken by Nick Simonite via helicopter.