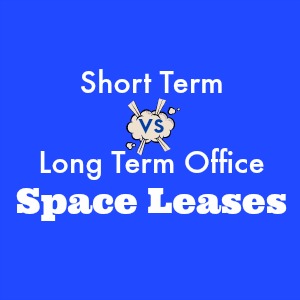 In most cases landlords and commercial listing agents want tenants to sign longer term leases (typically 3-5 years or more).  The primary reasons are that it gives them more stable cash flow, increases the value of their building, their lenders may require it, and it gives them more time to recoup upfront out of pocket costs (tenant improvements, lawyer fees, commission, etc.) associated with leasing the space.

As a tenant signing longer term leases generally leads to overall less costs, more stability, and reassurance that you have control of the space, however for some companies (e.g. startups) shorter term leases are a better strategy.  Short term leases do have some drawbacks however.

The decision whether or not to sign a short term lease or long term lease depends on the maturity and financial stability of your company.  If you feel confident about the future of your business and your ideal office space has the space and amenities to accommodate your current and future growth needs then signing a longer term lease may be ideal.  If your building does not have the capacity for you to grow into additional space later then you might stick to shorter term.

If you are a startup or unsure about your current and future business and growth needs then you might stick with shorter term leases.