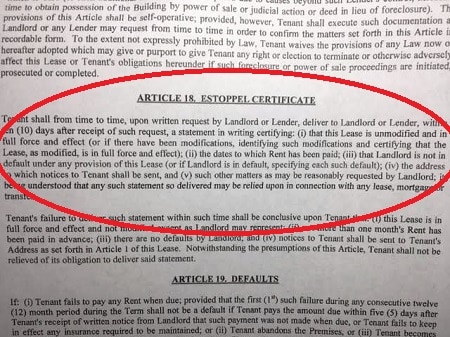 From time to time a commercial real estate property with tenants will be sold or refinanced. During the due diligence phase of the acquisition or during loan underwriting the landlord or lender will send a written request to all the tenants asking for written verification that their lease is in full force and effect and confirming the rent amounts being paid. This written statement is called an estoppel certificate.

You will typically see estoppel certificate language in the commercial lease contract. This is not typically a negotiable item when negotiating commercial real estate spaces for lease. The property owner's lender will require it because it provided proof of cash flow, which is what the lender or potential investor (aka purchaser) is concerned with.

From a tenant perspective there is really nothing to worry about. Having it in the lease does not impact you as a tenant. They only time the landlord will ask for this is when the property is being sold or refinanced.

By definition an estoppel certificate is a certified written statement signed by a party certifying for another party that certain facts for true. The delivery of this statement stops that party from claiming different facts later on.

What Will The Estoppel Letter Include?

The tenant estoppel letter will vary. Depends on the landlord and/or landlord's attorney. However below is the information they will typically need:

Below is an example of the language you would see in a commercial lease contract regarding estoppel certificates.

Tenant shall from time to time, upon written request by Landlord or Lender, deliver to Landlord or Lender, within ten (10) days after receipt of such request, a statement in writing certifying: (i) that this Lease is unmodified and in full force and effect (or if there have been modifications, identifying such modifications and certifying that the Lease, as modified, is in full force and effect); (ii) the dates to which Rent has been paid; (iii) that Landlord is not in default under any provision of this Lease (or if Landlord is in default, specifying each such default); (iv) the address to which notices to Tenant shall be sent, and (v) such other matters as may be reasonably requested by Landlord; it being understood that any such statement so delivered may be relied upon in connection with any lease, mortgage or transfer.

Tenant's failure to deliver such statement within such time shall be conclusive to Tenant that: (i) this Lease is in full force and effect and not modified except as Landlord may represent; (ii) not more than one month's Rent has been paid in advance; (iii) there are no defaults by Landlord; and (iv) notices to Tenant shall be sent to Tenant's Address as set forth in Article I of this Lease. Notwithstanding the presumptions of this Article, Tenant shall not be relieved of its obligation to deliver said statement.