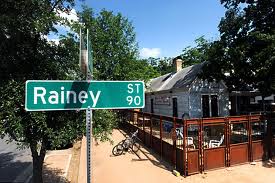 One of the last residential neighborhoods in Austin’s downtown 78701 zip code, the Rainey Street neighborhood is an enclave of 1930s era bungalows occupying a triangular area south of Cesar Chavez, west of Interstate 35 and north of Lady Bird Lake. It was included in the National Register of Historic Places in 1985. Once the home of noted musician Jimmie Vaughn of the Fabulous Thunderbirds, the neighborhood has been transformed into a trendy nightlife commercial retail district hosting cocktail lounges, eclectic bars and world cuisine “Austin food trailer” restaurants.

The Transformation of Rainey Street Austin to “Rainey District”

Much of this redevelopment is due to a former yoga instructor and waitress from Houston named Bridget Dunlap who opened her first bar in the re-gentrifying west end of Houston before venturing to the Capital City. What was originally planned for high-rise condominiums (think the Austonian; see here) per the neighborhood’s rezoning into Austin’s downtown business district in 2004 took a detour following the real estate doldrums of 2008 – 2009. The proposed big projects died from a lack of financing; enter Dunlap and the beginning of the neighborhood’s transformation into the “Rainey District.” She first opened the Lustre Pearl in September 2009, f soon followed by Bar 96. Clive Bar debuted on the corner of Rainey and Davis streets in 2010; the Container Bar (made from recycled industrial containers) launched earlier this year. Each establishment has its own unique character and atmosphere.

Others have followed her vision. Either open or under construction on Rainey Street are Banger’s Sausage House and Beer Garden, the Blackheart Bar, El Naranjo Mobile, the Javelina Bar,  G’Raj Mahal, Jack and Diane’s and the Rainey Street Bar. Rainey District is also home to the Emma S. Barrientos Mexican American Cultural Center, “dedicated to the preservation, creation and promotion of Mexican American cultural arts and heritage.”

The Rainey District’s allure is its “anti-Sixth Street” image. True, parking is difficult to find even during the day and there is no anchor attraction such as Austin City Limits Live in the sprightly Second Street District.  But the Rainey District is a destination simply because of its distinctly Austin vibe. Highlighted by its folksy, laid-back ambience, it’s a gathering place for those interested in a more sedate and cerebral evening out on the town. In other words, it’s not a haunt for shot guzzling frat boys looking to prolong their wasted youth.