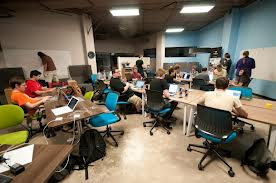 In this age of broadband connectivity telecommuting has grown in popularity but now a new style of work is emerging as a more productive alternative. Coworking spaces share a common working environment, such as an office, and usually those who participate are not employed by the same company.

Coworking solves the conundrum of working in isolation while offering an escape from the distractions that often impede the productivity of homebound workers. Moreover, coworking establishes a community by introducing socializing and networking among its members. It goes beyond sitting down with a laptop in a coffee shop; management practices are more akin to a cooperative with its emphasis on community and professionalism.

First organized in 2005 among tech workers in San Francisco, “Citizen Space” – the original coworking hub – begat a global movement that continues to spread. Now there are over 700 hubs in the US and the concept has proven popular in the UK, particularly London.

According to “The Coworker’s Profile,” a 2011 survey found that coworking hubs are populated by those who are in their late twenties or early thirties and two-thirds are men. 80% are college educated, most work in so-called “creative industries” or “new media” and half are freelancers. In the US, forward thinking companies are beginning to experiment with the concept as 35% of coworkers are salaried employees.

In Austin, there are a number of coworking hubs that serve a variety of interests. Posh Coworking, located at the corner of North Lamar and West 31st, is a work and meeting space designed specifically for women. Cospace, Austin’s first working coworking space founded in early 2010 on West Anderson Lane, is a 3,000 square foot area featuring an expansive community space and a full conference room. Cospace teamed with Austin accelerator Capital Factory and the City of Austin to open Austin Tech Live downtown. Further west on Anderson Lane is Link Coworking, a hub that utilizes five meeting rooms and a conference room. Also downtown on 6th Street is GoLab Austin, geared toward tech startups, creative design professionals and info system developers. Among the more eclectic options are east Austin’s Soma Vida, a hub that offers yoga and acupuncture, and Plug & Play, a work space located at Research and Anderson Mill that provides child care and a Parents Night Out on Saturdays.

These are just a few of the coworking hubs in Austin. There are others in Dallas, Houston and San Antonio. To learn more, visit wiki’s coworking page and you may discover a more productive and fulfilling work lifestyle.